February 20 2021, Carrollton, Georgia – It was the team’s Spring 2021 Season Opener, the first time on the dirt in 3 months! West Cobb Extreme 07 faced some really strong teams, and it was *really* cold. The Extreme players took some time getting back into their groove – But with each game, their individual talent and collective teamwork emerged.

After pool play the team emerged in the 4th seed in the bracket. The the team eventually won the next bracket games and ultimately took 1st place after a 3-2 win in the Championship game. Way to go Extreme 07!

Saturday, August 1, 2020, Powder Springs GA: West Cobb Extreme set a new record for registered players trying out for our 8U, 10U, and 14U teams! The fields were very busy with new players looking to showcase their skills to hopeful coaches and teams.

Thank you to all parents who brought their talented players to the club for our organizational tryouts! The West Cobb Extreme softball club and its solid program continues to grow. The club offers opportunities for players searching for a strong club that promotes player improvement, team growth, and the love of the game.

West Cobb Extreme Travel Softball Club 2020-2021 Organizational Tryouts are Saturday, August 1, 2020. Teams holding tryouts are 8U through 14U. For more information and to register your player, visit https://www.westcobbextreme.com/team-tryouts-workouts.html

It was a cold day but the team played well, with exceptional pitching, solid hitting, smart base running, and strong defense. Extreme 07 came out of the pool games undefeated and as the #2 seed. They won the first bracket game and then entered the championship game vs the #1 Seed from the pool play (Atlanta Flames).

Talk about a comeback win to cinch the championship – The Extreme girls were down 7-1 going into the top of the final inning . . . Thankfully, the bats came alive and the team rallied with 7 runs taking the score to 8-7!

Then Extreme had to protect the fragile 1 run lead in the bottom of the inning – Which the defense did exceptionally well: 3 up, 3 down. The final out, which gave the entire crowd a “hold your breath” moment, happened when the center fielder tracked a deep fly ball and it landing securely in her glove! The team went 5-0 for the day! Way to go EXTREME 07!

February 29, 2020, Rockmart, GA – West Cobb Extreme 12U 07 wins it all at the team’s first tournament of the 2020 season! The GSA tournament was aptly titled Hot Chocolate Mornings, and rightly so. Even with very cold temperatures, the team won every pool game, giving them the number one seed in the tournament bracket.

Extreme 07 continued to remain undefeated through bracket play, landing the team in the championship match. After overcoming a 1-2 deficit, the team finished strong with a 4-3 win over Outcast 12U 07.

Head Coach Jacobs credited the team’s performance to hard work over the off-season. Factors of the win were attributed to exceptional pitching, solid hitting, smart base running, and a strong defense.

Extreme 04 travel softball is proud to announce its Spring Softball Skills Clinic! Open to student-players ages 8 – 12, the clinic is designed to teach fastpitch softball skills in the areas of hitting, defense, and offense.

The softball clinic, instructed by current 16U travel softball players and coaches from Champions Fastpitch Academy, will help the student-player learn new skills and be able to bring them to the field. Whether the student is in her first season or has experience playing, the clinic’s sessions will provide a fun, safe, and valuable learning environment for players at all levels!

Marietta, Georgia – December 15, 2019 – The West Cobb Extreme 12U 07 Softball Team spent a Sunday afternoon at the Sterling Estates of West Cobb Senior Living Community sharing some holiday spirit with the residents. This is the 2nd year the team has visited the facility. The team brought gifts and handmade holiday cards and much HOLIDAY CHEER to over 20 residents of the facility.

Both the residents and the team engaged in conversations about best Christmas memories, most delicious holiday meals, and (of course) softball! Everyone enjoyed cookies and hot Chocolate and the event culminated with the Extreme 12U 07 team singing Christmas carols to the group! Everyone had a fun and festive time and not only were the residents pleased with the event (they requested an encore visit and updates on the team’s season!), but staff members of the facility said that the resident were so looking forward to the event and that the staff’s heart was so filled with joy listening to all the group singing and laughing . . . both young and old.

We will have a few more fans in the stands at Lost Mountain Park this coming season! 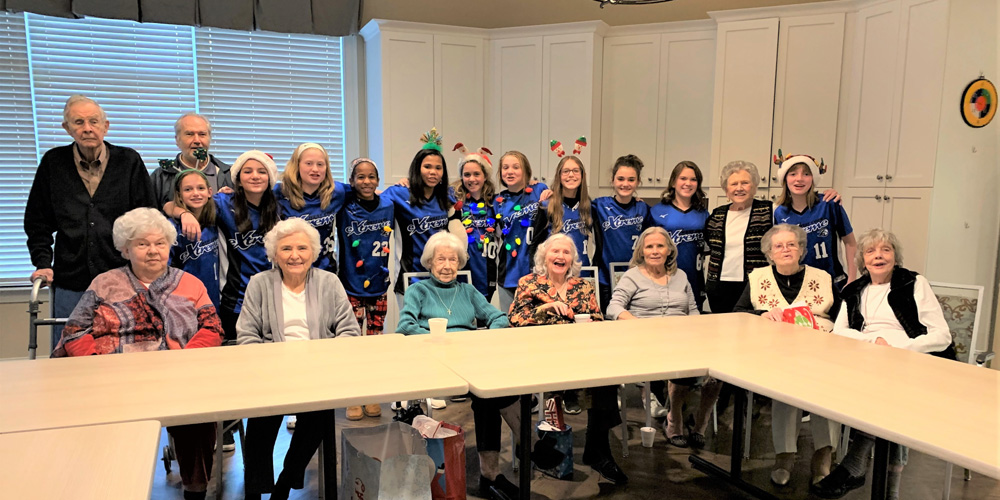 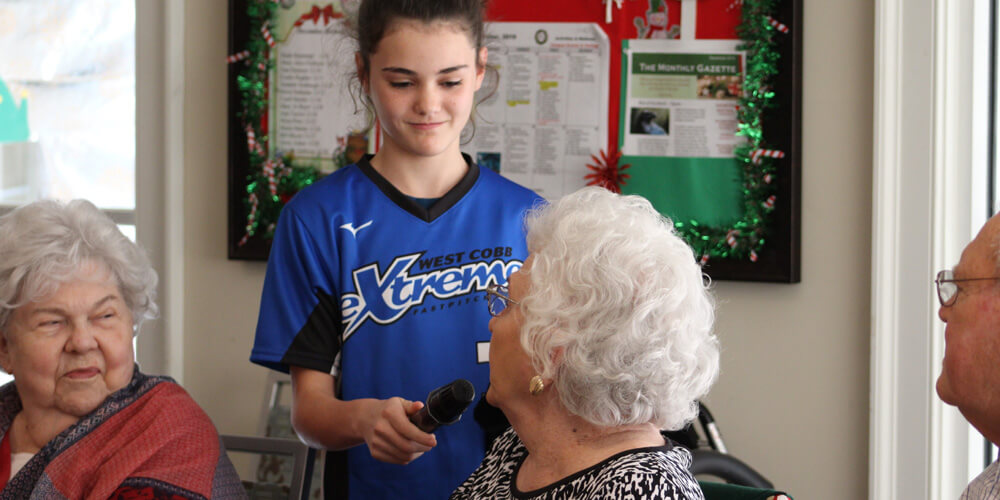 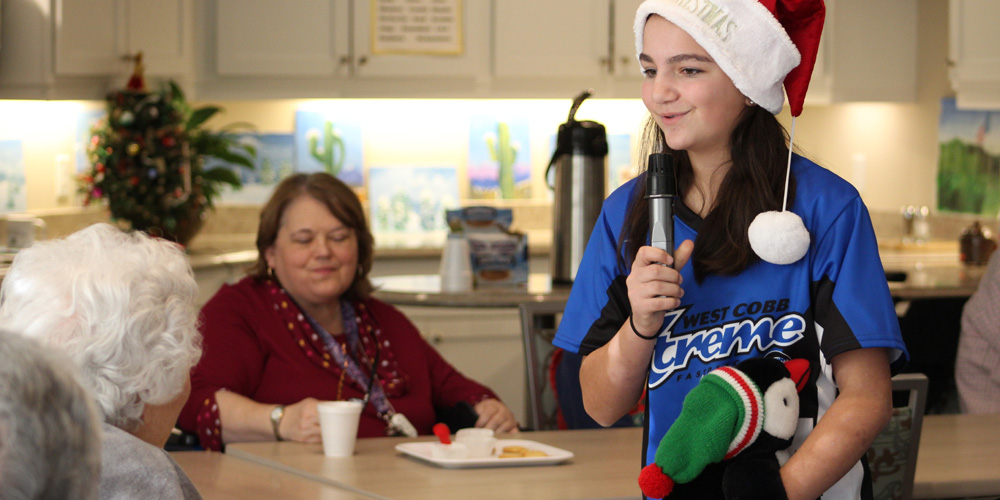 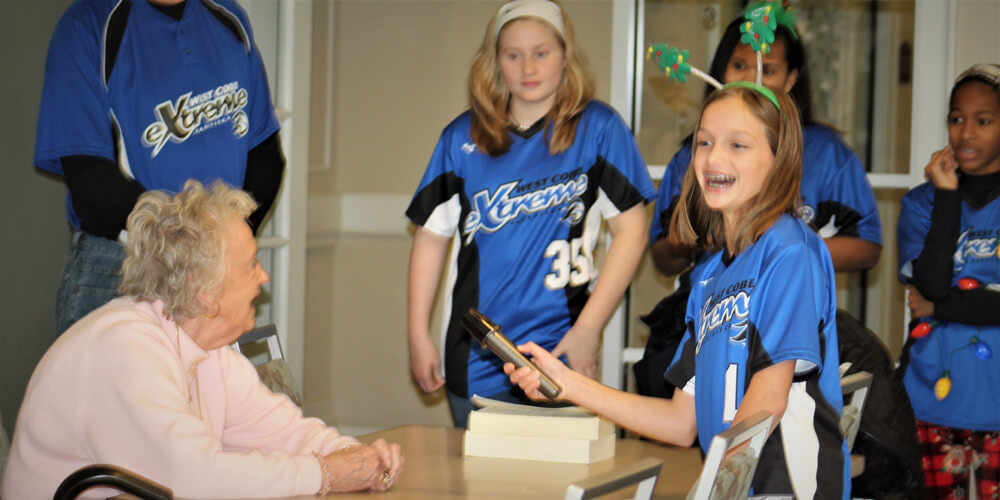 Read more about the West Cobb Extreme 12U 07 Softball Team

Rockmart, GA, November 24, 2019 – West Cobb Extreme 07 Jacobs travel softball team took 1st place in the GSA “Let’s Chase the Gobbler” tournament. The tournament was played at Nathan Dean Park. The team grabbed the #1 seed in pool games, and continued through the bracket games to end up undefeated and took the 12U championship game. West Cobb Extreme 07 won the championship game in a shut out against Rage 12U, with a final score of 7-0.

Head Coach Jacobs noted that the team played well all day, with exceptional pitching, solid hitting, smart base running, and strong defensive play. Even with the cool temperatures, it was a good day for the team to see the results of significant hard work through the fall season! Go Extreme!

Good fun, good fundraising, good teaming, and a few clean cars along the way! The West Cobb 12U 07 Extreme travel softball team had a very successful fundraising event on Saturday, October 12th, 2019 at the Chick-fil-A located at 2555 Dallas Hwy SW in Marietta. The team had a great time where the girls not only earned some funds to support the team for the 2019 – 2020 season, but bonded and developed some great memories!

Thanks to Chick-fil-A for allowing the team to have the car wash and thanks to all the team, the parents, the car wash recipients (and other donations) for the support.

Learn more about the team: West Cobb Extreme 12U 07 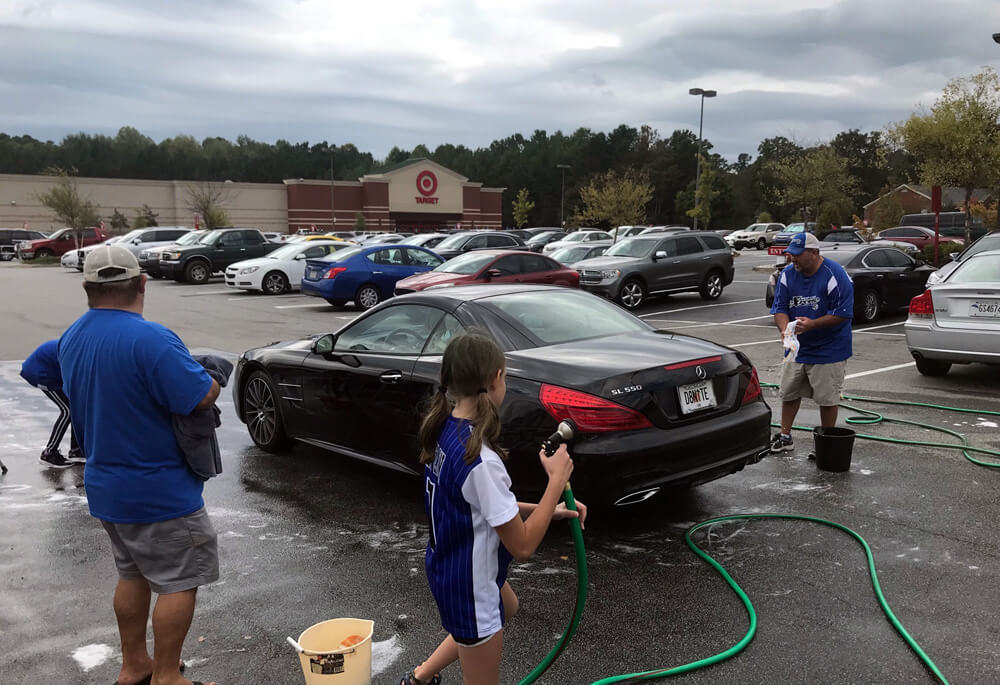 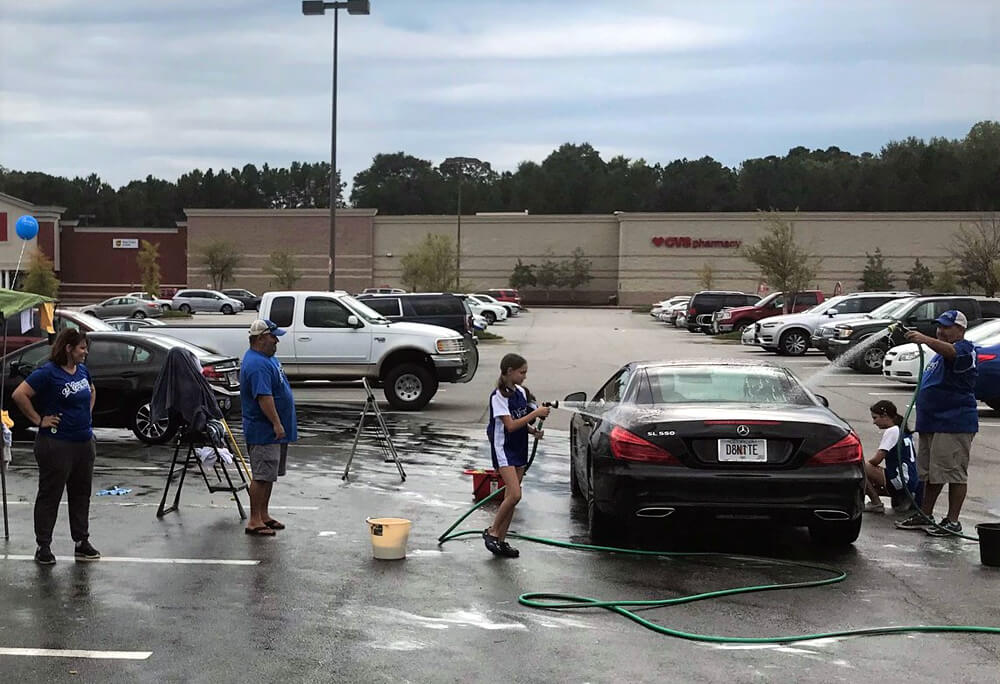 Coaches of the team noted “Though the 2019 GSA State Tournament Champions is a title that will last a year, the memories made on a night like this will never be forgotten. The life lessons of hard work, teamwork, diligence, personal commitment, compassion, empathy, class, and perseverance will be with these girls forever. Seeing them lift each other up and battle back from the losers bracket to win this trophy was nothing short of incredible.”

The softball team all wore their crazy socks and handed out Down Syndrome Awareness bracelets and stickers, as March 21 is World Down Syndrome Day. The kids in attendance were invited to play ball on the field with the Extreme team. Extreme players assisted the kids with hitting the ball and running the bases. Before and after the game, the kids also enjoyed playing in a jump house and dancing to music!

The team took donations throughout the evening to raise money for Down Syndrome Awareness. A total of $731 was raised and will be issued to Down Syndrome Association of Atlanta and Down Syndrome Diagnosis Network of Atlanta. A good time was had by all!

Arriving at 8:00 am on Saturday, March 23, 2019, West Cobb Extreme 04 players started warming up for what would end up to be a championship win. The first place trophy took the team’s players 16 and a half hours to win, with the championship game ending at 12:30 am Sunday, March 24!

While the first pool game didn’t go as planned for West Cobb Extreme 04, the rest of the day’s tournament games went in the right direction. After winning the next two pool games, the team started its first bracket game in the second seed.

Facing off against FCA Fusion, the players fought to win the single-elimination contest. The game turned in to an eight-inning battle, lasting two and a half hours under ITB rules. Players on both sides of home plate kept fighting in a great match through a cool evening in north west metro Atlanta. In the bottom of the 8th, Maddison T’s walk-off picture-perfect hit was the ending in Extreme 04’s victory over FCA Fusion.

Extreme 14U was down 5-4 in the top of the third inning when Maddie C. doubled on a 1-2 count, scoring three runs. Hailey M. grabbed the win in the championship game for West Cobb Extreme 04 as she pitched four innings, allowing 11 hits and ten runs while striking out four and walking zero.

Extreme 04 launched two home runs through the day – Alexis M. had a dinger in the second inning against FCA Fusion. Emma M. launched one over the fence against the stunned NYO Patriots 04 in the championship game!

Way to go, Extreme 04! It was an exciting day, and well worth the fight. This was only the third tournament of the 2019 season for the West Cobb Extreme 04 squad. The next scheduled tournament for the team is on April 13, 2019. Visit www.westcobbextreme.com for more information.

It was an exciting game and the West Cobb Extreme 07 team not only were able to cheer on the Yellow Jackets in the victory, but also be on the field with a GA Tech softball player during the national anthem! The Extreme team witnessed (and learned from) some great play from both of the college teams. West Cobb Extreme 07 players took pictures and received signed autographs from the Georgia Tech softball team. WHAT A DAY! 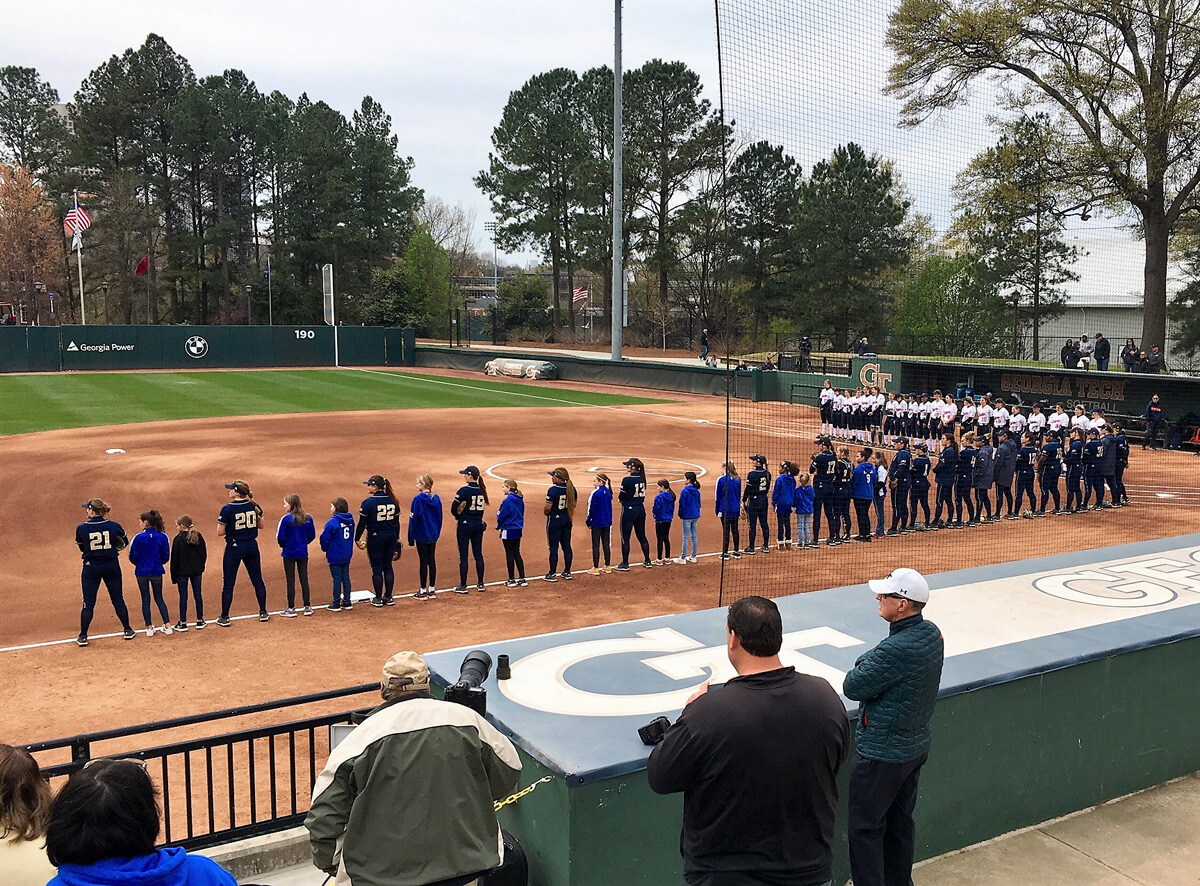 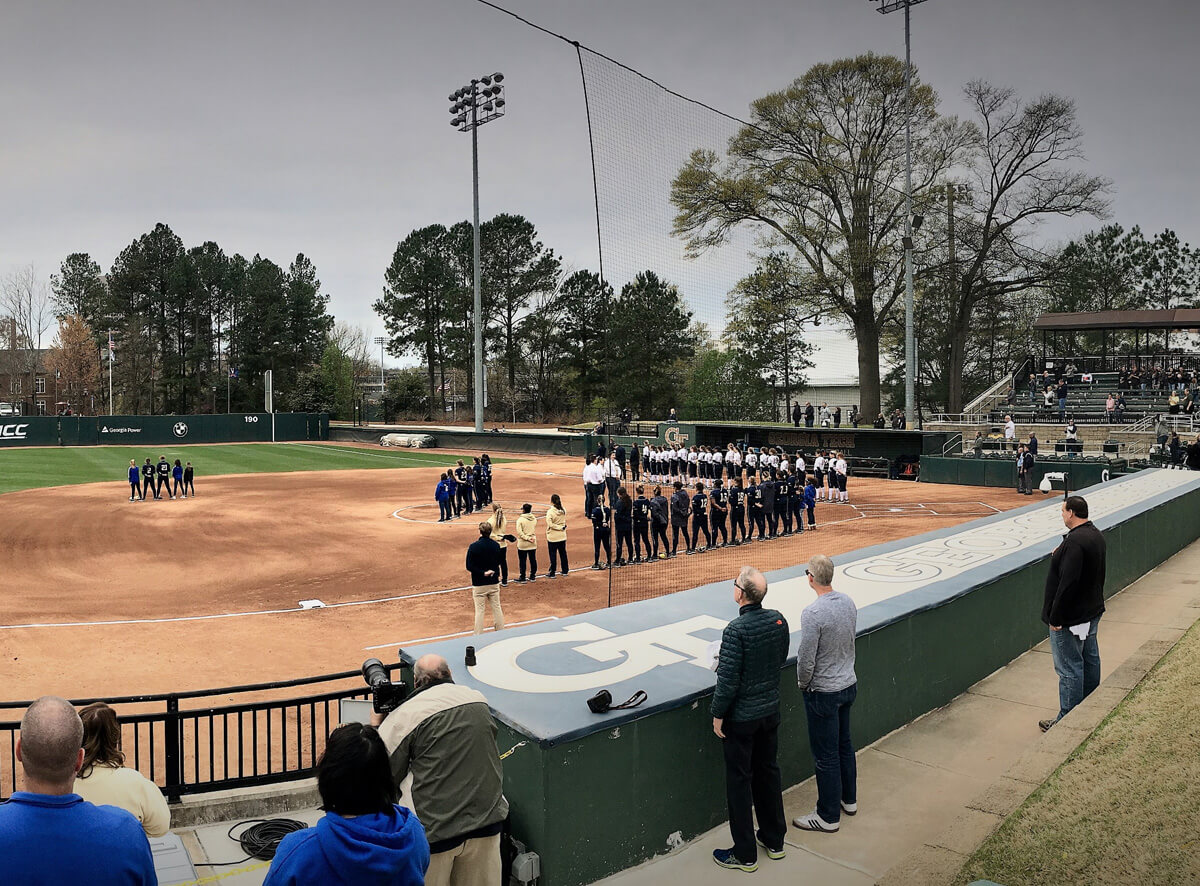